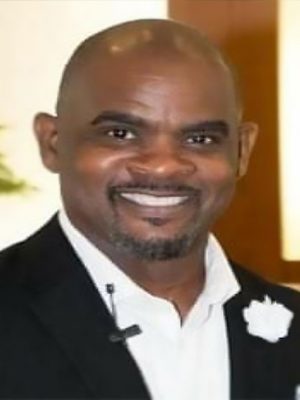 The Rev. Dr. Jeffrey A. Williams is the son of Mrs. Anne K. Williams and the late Mr. James A. Williams of Baltimore, Maryland.  He currently serves as the senior pastor at New Christian Fellowship Church, Fairview Heights, IL.  At 8 years old, he accepted Christ into his life as Lord and Savior and became an active member at St. Paul Community Baptist Church under the tutelage of the late Rev. Dr. Edward M. Revels.  He served in various ministries at St. Paul until he graduated from high school and enlisted in the United States Air Force in November 1982.  During his military tenure, Dr. Williams quickly rose through the ranks and earned the distinct honor of being promoted to the rank of Chief Master Sergeant (E-9), the highest enlisted grade.    As a senior advisor to the Major Command General Counsel, he developed policies and procedures for implementation, directed overall training, assignment, and professional development of paralegal and civilian legal support personnel throughout a 12-state geographical region.  On January 1, 2009, he retired from the Air Force with 26 years of stellar service.

While in the Air Force, Dr. Williams acknowledged his call into the ministry.  In 1989, he received his license to preach while at the Progressive Missionary Baptist Church, Mesa AZ, under the late pastor, Rev. Simeon T. Weathersby.  In 1994, he was ordained by the late Pastor Walter F. Thomas of the First Missionary Baptist Church, Phoenix, AZ.  He served in various ministry roles during his assignments at various military installations and associated communities to include interim pastor, associate minister, finance committee chair, trustee, choir director, minister of music and a host of others.

In addition to being an Airman and Pastor, he is also an entrepreneur.  He is the Founder and President/CEO of JCW Consultants, LLC, a firm specializing in maximizing human performance and productivity; and the author of “Leadership – Followership 360: How to Create Accountable, Flexible, and Dynamic Teams.

Dr. Williams holds a PhD in Organization and Management from Capella University, a Master of Arts Degree in Religion (Cum Laude) from Liberty Theological Seminary, a Bachelor of Science Degree in Management from National Louis University, and an Associate’s Degree in Paralegal Studies from the Community College of the Air Force.  He currently serves as Chairman, Board of Directors for the Christian Activity Center in East St. Louis, IL; an advisor for Impact Transitional Homes, and serves as a trustee for the Air Force JAG School Foundation.  Dr. Williams earned Toastmaster’s International highest award – Distinguished Toastmaster (DTM).  He is also a chaplain with the Fairview Heights Police Department in Fairview Heights, IL and active member with the Alpha Phi Alpha Fraternity, Inc, Delta Epsilon Chapter, East St. Louis, IL.

Dr. Williams is married to Cynthia D. Williams.  They have two sons Joshua and Jacob.